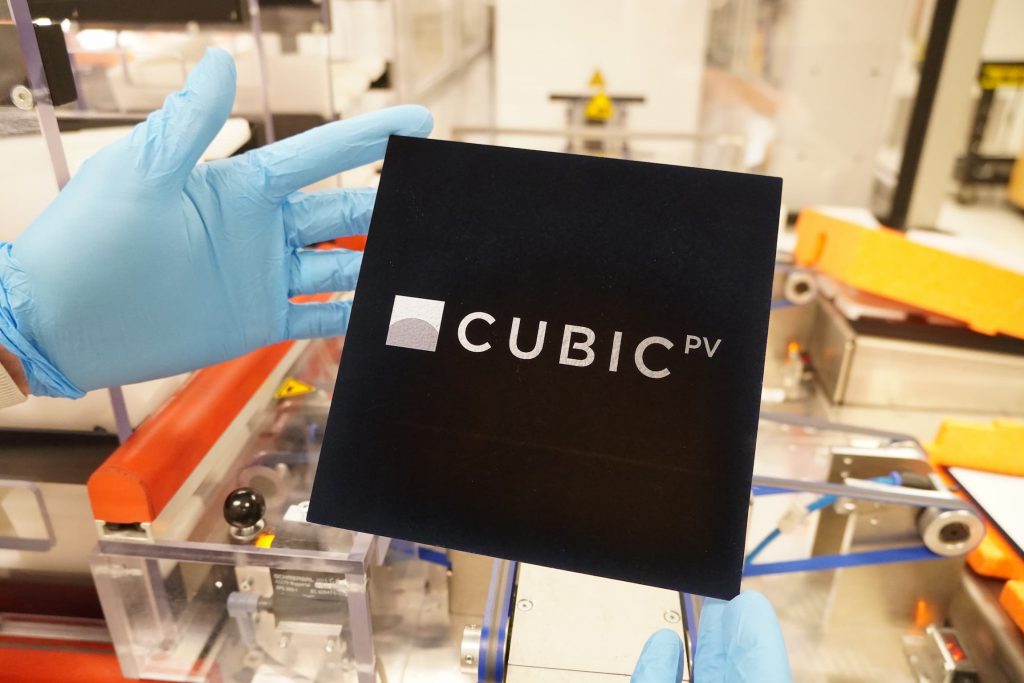 To date, the solar industry has primarily depended on single junction PV technology or the use of only one light absorbing material, often silicon, to convert sunlight to electricity. This technology is approaching a module efficiency ceiling of 24%, through small, incremental gains. Tandem technology, also referred to as multi-junction, introduces a much needed dynamic in that it layers two light absorbers into one device, thereby breaking the efficiency barrier of single junction devices and boosting the power output of the end panel by 30 percent.

Perovskite materials have tremendous potential in single junction devices given their inherent cost advantages and are ideal for tandem modules due to their highly-tunable light absorption properties. It is the latter that allow perovskite semiconductors to effectively capture the sun’s visible light as a tandem top cell while Direct Wafer products provide the optimum low-cost bottom cell to harness the infrared portion of the solar spectrum. In a tandem structure, the bottom layer produces one-third of the device’s energy but still carries 100% of the production cost. It is here where the Direct Wafer cost advantage is essential.

During the last two years, 1366 has been working towards a tandem future, attracting the support of BEV and returning investors that recognize the fundamental role Direct Wafer technology plays in making tandem modules a reality. The merger with HPT will pave a path to long-term tandem leadership.

Interest in perovskite technology has surged given the material’s potential for high efficiency, low cost, and broad applicability in the semiconductor industry, particularly in solar. Perovskite solar devices are rapidly approaching the efficiency records set by silicon PV. The primary obstacle remaining in the commercialization of perovskite solar technology is durability; an area where HPT has excelled. HPT has tackled the durability issue through better chemistry and building intrinsic stability into the material itself, making it far more robust. HPT has developed one of the strongest global patent portfolios on the technology with more than 160 patent assets to its name.

“Our singular Direct Wafer process is the crucial advantage in making tandem modules a reality and with the HPT merger, we have the blueprint for achieving economically-viable, tandem solutions for terawatt-scale,” said Frank van Mierlo, CEO of 1366 Technologies and the new CubicPV. “Since their founding, both companies have championed the importance of low-cost manufacturing innovations to achieving the world’s energy transition goals. By joining forces, our combined entity is uniquely positioned to lead the rapidly growing solar industry.”

“This agreement will unite two of the solar industry’s most disruptive technologies to dramatically boost the energy harvest and drive down costs of solar installations, helping to meet the world’s electrification and climate goals,” said Michael D. Irwin, CTO of HPT and the newly formed CubicPV. “The value of our combined assets will write the next chapter for clean solar energy and underpin a massive industry that leads through innovation and cooperation to enable the leap to tandem PV.”

“Eight years ago, Hunt made the strategic decision to focus on developing perovskite solar cells, recognizing its importance as a ‘next generation technology’ to complement silicon and help address the world’s energy needs,” said Hunter Hunt, CEO, Hunt Energy, the parent company for both Hunt Perovskite Technologies and Hunt Energy Enterprises. “By merging with 1366, we collectively are uniquely positioned to lead the industry in the development and manufacturing of affordable, durable solar technology.  Hunt is thrilled to join BEV and the other shareholders in supporting the mission.”

“Our priority as a venture fund is to build the new, cutting-edge companies that will dramatically improve our chances of dealing with climate change. The combined entity resulting from the merger of 1366 and HPT is one such example,” said Carmichael Roberts, Breakthrough Energy Ventures. “We commend Hunt for taking an early lead in the development of perovskite technology and for their vision. Tandem solar is the future and their investment into the combined entity will have made a meaningful contribution to that future.”

1366 and HPT will begin to operate immediately as CubicPV, with offices in Bedford, Massachusetts, and Dallas, Texas. The name holds significance as it reflects the shared cubic crystal structure of both silicon and perovskite.

1366 Technologies is consistently recognized as one of the world’s most innovative companies in energy. Its Direct Wafer® technology replaces a decades-old solar manufacturing process to make a superior class of silicon wafers, the building blocks of solar cells. These wafers deliver high performance and an unbeatable cost advantage to cell and module manufacturers seeking innovations that yield a significant reduction in levelized cost of energy (LCOE) and will help them win in the age of terawatt solar. 1366 Technologies is headquartered in Bedford, MA. For more information, please visit www.1366tech.com.

HPT specializes in the development of highly-stable and efficient metal halide perovskite materials for use in single-junction and tandem PV solar panels for the utility-scale market. HPT was created and incubated within Hunt Energy Enterprises, Hunt’s energy technology venture business unit. It is part of a larger privately-owned group of companies managed by the Ray L. Hunt family that engages in oil and gas exploration, refining, power, real estate, ranching and private equity investments. For more information, visit www.huntperovskite.com.